The Darkroom is honored to be voted best photo lab by [F]Awards. Framed Network conducted an independent poll of film enthusiasts for the Best Photo Labs and The Darkroom was recognized as the winner of the Best film Processing Lab category.  [F]Networks is a photography show that features unique talents, tutorials and workshops for the aspiring and pro photographers. 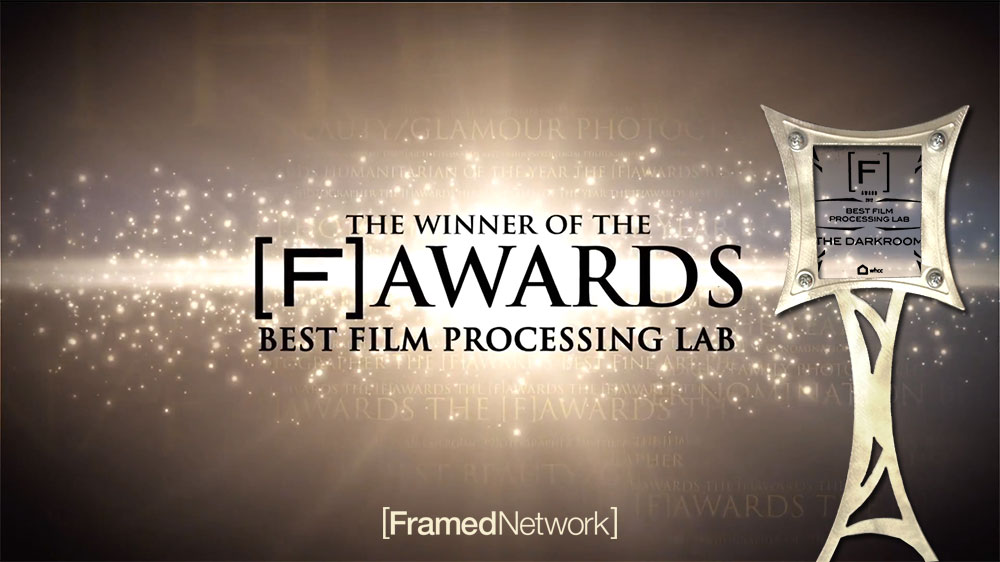 [Phil Steblay – The Darkroom]  This is very exciting and we’re was so thrilled to be among such amazing photographers… this young lady from the UK was showing her work and I’m just blown away by her images and she’s in a league of our own.

It’s really a wonderful honor to be even considered for the FramedNetwork’s awards, much less too surprisingly win as the best photo lab.

[FramedNetworks] You obviously have people out there that adore what you guys do and we’re just facilitating. It’s obvious The Darkroom photo lab has a lot of fans that love your work and the quality of  your work. FramedNetwork is honored to have you here. [Phil] I’m speechless because we didn’t really expect to win and we had no expectations of even winning. Just being here and seeing the youth and vitality of photo, and film photography is very refreshing.  People think of film photography as a lot of old guy winding down their businesses, but there’s an influx of youth, energy and creativity in film. [FN] Tell us about your business. [Phil] We’re a traditional film lab and our roots go back to my father. (learn more about The Darkroom) We started doing work for camera stores throughout the West and that was our base of business. We developed The Darkroom Photo Lab as a resource for film photographers across the nation and internationally to be able to get precise quality film developing of all types… E6, C41 to true black and white film developing. Our photo lab does dip and dunk for film ranging from 110 film to 8 x 10 sheet film. [FN] What’s cool about you guys is that you’re a resource for film photography, really try to help educate photographers. [Phil]  Yes, we’re all film shooters and we love beauty of film, the tactile part,  the planning, the film selection. That’s in addition to the quality and feel a photographer gets from film. I talked with some of the other nominees for Best Photo Lab and we’re all agreeing that digital stuff you can easily spot, including drylab inkjet stuff. We are pretty traditional in what we do and it’s fun and very rewarding and really a pleasure to be associated with the [F]Networks. [FN] On behalf of the FramedNetwork, The [F] Awards Committee, PHLearn and White House Custom Color, we honor you tonight as the top voted Film Processing Photo Lab. Thank you very much and it’s a honor to meet you.