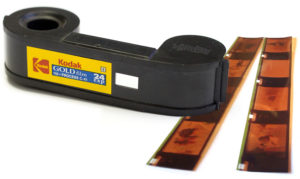 These film cartridges were launched by Kodak in answer to consumer complaints about the complications involved with loading and unloading roll film cameras. With the cartridge film you don’t have to attach the film leader to a take-up spool and cannot go wrong. The cartridge simply drops into the camera, you close the camera’s back door, wind on and shoot. Even if you open the camera with a half exposed film inside, the precious exposed film is well protected inside the cartridge. And at the end of the film, you don’t have to rewind.

The first Kodak cameras being branded “Pocket Instamatic”. The new pocket-sized cameras became immediately popular, and soon displaced competing subminiature cameras from the market. The 110 film width is 16 mm. The film is paper-backed; the paper being printed with frame numbers, visible through a small window in the cartridge’s rear; a larger window in the film chamber door shows this frame number window plus a label on back of the cartridge giving film details.

The small negative size of 110 film is half the size of 135 (35mm) film and because it’s small it’s difficult to enlarge and get high resolution scans and the film is often associated with prints and and scans that are grainy and lacking sharpness.

The pocketability and ease of loading made 110 popular very quickly, creating enthusiasts for the camera and it’s film. The size allowed designers to carry a small pocketable camera that had an aspect very different from the traditional 35mm cameras.  The design of the cartridges had a very basic system of notches in a tab on the end to indicate film speed, but few cameras took advantage of this, and many film cartridges did not even have the required notches.

Although the format is commonly associated with print film, Kodak also produced Kodachrome 110 slide film until 1982.

Because of its unique feel and grain, photographers continue to use the last batches of 110 film.  You can buy 110 film at Film photography Store or Lomography.

Lomography reintroduced slide film for 110 with their Peacock 200 ASA model. However, since not all 110 cameras have a settable ASA dial (low or high, depending on presence of a notch in the cassette), a ND filter has to be used over the lens or the exposure compensation dial has to be used where available. Otherwise, over-exposure by a factor of x2 will result, leading to over-exposed images. Their other films include the B&W ORCA with 110 emulsion for monochrome shots and Lobster Redscale 110 film the creates images with a golden glow.